A New Issue for the Nuclear Deal: Retaliate Suspension With Suspension

» The Leader’s New Red Line: Instantaneous Lifting of All Sanctions

Following last week’s remarks by Iran’s leader ayatollah Khamenei when he said, “If the sanctions are not to be lifted, then there is no deal,” one of his Revolutionary Guard (IRGC) commanders explained the remark to mean that the lifting of all sanctions when the implementation of the July nuclear deal starts is the “red line” of the supreme leader, adding that if the United States merely suspends the sanctions that exist against Iran – rather than dismantles them altogether - then Iran would response with a reciprocal suspension of the same magnitude, not any greater.

Writing in IRGC’s weekly newsletter Sobh Sadegh , general Yadollah Javani commented on ayatollah Khamenei’s recent remarks on the nuclear deal and wrote, “During the talks and especially in its last two years, ayatollah Khamenei had made it clear that the philosophy and purpose of the Islamic republic in engaging in the talks, and especially talks with the US over the nuclear issue, was to have the sanctions against Iran lifted, making it clear that the conditions for taking any trust-building measures by Iran were the lifting of all sanctions on day one of the (implementation) of the agreement. Therefore, the instantaneous lifting of (all the) sanctions have been one of the red lines of the supreme leader for the talks.”

The article by Javani, who is ayatollah Khamenei’s advisor on IRGC affairs, continues, “After the July nuclear deal was published and Iran’s president and members of the negotiation team had repeatedly stressed on the lifting of all the sanctions, Western officials and particularly Americans in various ways stressed on keeping the infrastructure of the sanctions and have used the term suspension rather than lifting of the sanction.” He concluded this was the reason why the supreme leader had called for “the clarification on the outcome of the sanctions (regime).” Javani calls for attention on the issue of lifting the sanctions, presumably because the nuclear deal is expected to undergo review by some Iranian official body.

The article by Javani is titled, “Suspension for Suspension,” meaning that if the other parties to the nuclear deal merely suspend - rather than lift – the sanctions, Iran should or would suspend the implementation of its commitments under the deal. “Iran’s every curtailment measure of its nuclear activities will be based on the suspension and lifting of the sanctions. If the other side tries to suspend the sanctions, instead of lifting them, Iran’s utmost response should be to suspend some of the activities, taking proportionality into account.”

He continued, “What comes of this sentence is exactly contrary to why we went into the talks.” Elsewhere in his remarks he also said, “That we sat and talked, and conceded on some issues, and gave concessions for primarily so that sanctions would be lifted. If the sanctions are not to be lifted then there is no deal, it does not make sense. Officials must clarify this and should not say that these remarks are made for him to convince his domestic opponents. Yes, the battle on this in America is real; I do not believe this is a game they are playing. They really have different views on this (in America) and their differences are clear to us, but what is said officially must be responded with. If it is not responded then that will become the acceptable fact.”

Prior to Khamenei’s remarks, Abbas Araghchi, one of Iran’s negotiators announced on television that the “Europeans only want to suspend the sanctions and had not agreed to lifting them. Sanctions imposed by the US Congress too would not be lifted. Generally, these sanctions are under the authority of Congress and not the president of the US.” He continued, “Congressional sanctions cannot be lifted by the US government. This is something that Congress must do itself, but the conditions are not there for that now. The US president can suspend their implementation. What we ask of the US president is to not implement the sanctions and commit himself to this which should also be confirmed by the security council. The US government is be committed not to implement any of the sanctions so long as the (nuclear) deal is in force.”

Since the July nuclear agreement, it appears that Hassan Rouhani’s administration now is at logger heads with the supreme leader and the agencies under his direct control over the issue of suspending or lifting the sanctions against Iran. Critics of Rouhani’s administration and the nuclear deal quote American officials that the biggest threat to “suspending” the sanctions is the possibility of restarting them against Iran at any time and believe that they need to be completely dismantled after the implementation of the nuclear agreement so that they cannot be re-launched if the Islamic republic reneges or violates the provisions of the July nuclear deal. 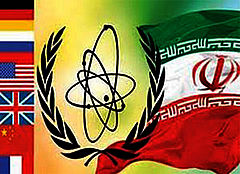