Confrontation Between Government and Guardian Council: Prelude to Elections

In response to President Hassan Rouhani’s most recent remarks that the Guardian Council only had the duty of “monitoring” the elections (and not implementing them) and that the screening of candidates was the work of government’s “executive boards,” the executive deputy of the Guardian Council, Siamak Rahpeyk, that has traditionally and zealously been vetting candidates for national elections fired back last week by saying that “according to various laws the final say over whether candidates were qualified to stand for election or not” rested with the GC.

“On the basis of various laws, the final say and examination of the competency of individuals to run for elections rested with the Council,” Rahpeyk said adding that the executive agencies of the ministry of interior were responsible for other activities leading up to and the counting of the votes. He made it clear in his remarks that this was not his interpretation but “written specifically into law.” He acknowledged that the executive agencies could present their opinions on the approval or disqualification of a candidate and stopped right there. He also warned that the current procedures would continue in the future.

While Rahpeyk’s views are not new, he did not stop there and said that the GC could even completely annul an election. “The Guardian Council can even make a decision on annulling a complete election, which is lawful and is the meaning of monitoring the elections,” he asserted.

Last week, during a joint session of government appointed governors and the cabinet, Rouhani had said, “There is no spot in the country (i.e., in the political system) where sincere and qualified individuals who want to serve their country by presenting their experience and service can be disqualified. All groups are respected by the government and are equal in its eyes. The place where a decision is made about whether a person qualifies to run in an election or not are the executive boards.”

In another part of his talk he made an indirect reference to the Council by saying, “If everybody agreed that decisions for this country are to be made by its people, then problems will be solved.” “The Guardian Council is the monitor and supervises the elections, not executes them,” he had added. He continued, “In the first years of the revolution there was no Guardian Council but the best parliament was established despite the presence (and participation) of destructive groups.”

Rejection of Rouhani’s remarks were not confined to the GC. Guard General Aziz Jaafari also responded the following day and warned that “remarks to weaken the effective institutions of the revolution, such as the Guardian Council, are against national unity.” He continued, “Those who have attained access to leadership posts in this country through this very council should be more cautious of their words.”

This is not the first time that Rouhani questions the authority and practices of the Guardian Council. During a meeting with the commanders of the armed forces on May 30, 2015, Rouhani had said that all legal groups had the right to participate in the elections. He also said that the government was neutral in the elections and did not support any political faction adding, “other branches and para-government groups and other powerful groupings” should not have the right to support a faction in the election process,” a reference to the Guardian Council. He then named agencies such as the army, the Guards, the state-run radio-television network, governors, Friday Imams, senior government officials as groups that should not interfere in the normal and legal electoral process.

These remarks come as the current government that is supported not by hardline Principlists but by reformers will be organizing two major critical elections early next year, one for the parliament and the other for the Assembly of Experts on Leadership which determines the next supreme leader while overseeing the performance of the current one. 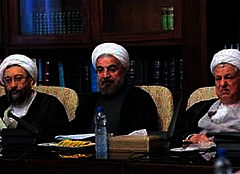