Confrontations Between the IRGC Commander and the President Continue

» Jaafari Forgotten His Own Earlier Remarks?

After a number of Iranian Revolutionary Guard (IRGC) commanders criticized President Rouhani’s recent remarks that the July nuclear deal had averted the shadow of war hovering over Iran, the top IRGC commander, who had until two years ago been talking of the “inevitability of war,”  stepped in this week and rejected the president’s remark and said it was the “defense readiness of the  armed forces” and the “presence of a wise, brave and revolutionary leader” that have dissuaded others to start a war with Iran.

Speaking at a press conference, Guard General Aziz Jaafari said, “Unfortunately a (wrong) point that is made after the nuclear talks is that the talks and the (nuclear) deal have lifted the ‘shadow of war’ over the Iranian people and that it was the negotiations with the enemy that have brought security to the Islamic republic.”  While he did not name Rouhani but the president had last week said precisely that the talks and the deal had lifted the “shadow of war” over the people.

Jaafari added, “The anti-enemy posture, pride, and revolutionary spirit of people in the course of history have been shown to the world and along with these the defense readiness of the armed forces, their military technology especially in the fields of missiles, vessels, ground, air and sea are among the key deterrent factors against the threats” facing Iran. He continued, “The possession of a wise, brave and revolutionary leader by the regime, and most importantly the trust of people in the regime, its leader and policies, along with support for the revolutionary calls and policies of the regime have been the main deterrents in a war against the Islamic republic.”

In another part of his remarks he said, “Enemies have repeatedly announced that the nuclear deal can increase the groundwork for the possibility of war and can facilitate military decisions.”

Last month Hassan Rouhani and his foreign minister Mohammad Javad Zarif spoke at a nuclear diplomacy conference at Alame Tabatabaee University in Tehran where they both said that the nuclear talks and the July agreement had made Iran safer. “Nobody can any longer beat the drum of war against us and all the antagonistic climate against Iran has dissipated. The world has understood that agreement can be reached on the basis of logic, respect and mutual interests.”

Jaafari’s remarks about peace are noteworthy because until about two years ago and prior to the nuclear talks he is on record to have said on a number of occasions that war between Iran and what he called its “enemies” was “certain” and “inevitable”. “Their animosity will end in a physical confrontation (with us),” he had said. “This (war) will eventually take place because the pace at which the revolution is moving towards its goal is not tolerable by them and one day they will created the war conditions. This event will take place even if reason is used,” he had added saying that the Islamic republic had to prepare itself for a war whose nature would be very different from the 8-year war between Iran and Iraq. Soon after Jaafari made these remarks, the head of Iran’s joint armed forces command – the highest military officer – Hassan Firuzabadi and then president Mahmoud Ahmadinejad responded by saying that Jaafari had made an analytic or “calculation mistake.”

But Rouhani’s differences with the Revolutionary Guard go beyond their remarks and views regarding the nuclear talks, the July deal or even relations with the West. Rouhani has on a number of occasions said that the military in Iran should focus on its main job of defending the country. He has said the armed forces and especially the Revolutionary Guard needed to stay out of politics. On some occasions he has even criticized the role that the Guard plays in economic activities of the country.

Jaafari has been vocal in challenging Rouhani’s views. Some time ago he had presented his view of the role the IRGC should play in the country. “The Revolutionary Guard were created to defend the Islamic revolution and its achievements according to article 150 of the constitution. The 8-year war (with Iraq) took the Guard to military fields while in the beginning it was not planned to be a military force. After the war because military threats became serious, the Guard saw it necessary to get involved and provide the necessary readiness.” He then said, “The revolution is threatened more by political and cultural issues, and the Guard has the duty to respond to these threats and stand against groups who intend on harming the revolution.”

He then went into an area that is clearly a response to what the government has been asserting. “Some warnings that are issued by the Guard neutralize those who want to take political or cultural actions against the regime. It is natural that these individuals would engage in psychological activities against the IRGC and ‘accuse” it of interfering in politics. What ayatollah Khomeini had banned is for the Guard to support any political factions or groups.”

He continued, “There are tens of Principlist (hardline ideological) groups in line with the revolution but the Guard cannot support them. The Guard defend the Islamic revolution and the directives of the supreme leader which translate into defense of the values and principles of the revolution, something that opponents of the Guard claim is the IRGC’s interference in politics. The Guard are smarter than to be fooled by their tricks.”

These last remarks were in contradiction to what Jaafari himself had said earlier when he was first appointed to lead the IRGC force in early 2008. At the time he had said, “For the continuation of the revolutionary path, support for Principlists (who are the ideologically hardline groups in the country) is an absolute necessity, inevitable and a divine duty of revolutionary forces of the country.” In this very talk Jaafari had said that he was happy that the Principlist groups had returned to lead the country after 25 years of the revolution, as they enjoyed the support of the executive and legislative branches.

In recent years, the IRGC have been accused of interfering in the political affairs of the country not just by reformists who oppose many aspects of the regime but even by Mahmoud Ahmadinejad, and number of other hardliners and Principlists.

More recently, the representative of ayatollah Khamenei in the IRGC cleric Ali Saaedi told Fars news agency – which belongs to the IRGC – “We do not want to interfere in the elections but say that people should vote to the dedicated, and this is not interference. They want to take away our influential vote.” His reference to elections are the two upcoming ones, for the influential Assembly of Experts which theoretically can choose the supreme leader and the other is the Majlis elections, which some are concerned may bring in more moderate figures. Both are planned to take place early next year. 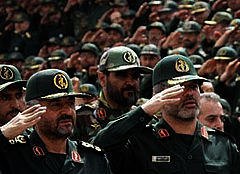