While less than five months are left to what many call momentous elections in Iran, the secretary of the powerful Guardian Council – a body that vets the candidates to national elections -  announced, while implicitly attacking Hashemi Rafsanjani and Hass Rouhani, that the Council would not allow individuals who did not have “heartfelt conviction to velayat fagih ” (rule of the clerics) to be candidates in the upcoming elections because important posts in the Islamic republic belonged to Hezbollahi kids.

Speaking at an event titled Velayat Fagih, the secretary of the Guardian Council and the ultra-conservative who in practice manages the body, ayatollah Ahmad Janati, announced, “Today there are people in the country who only pretend to follow the velayat fagih while in practice and in secret they act against him.” Then without naming Rafsanjani by name but in a clear reference to his statements, said that some individuals in the country continue to stress the ‘rights of people.’ “Some individuals are trying to misuse the statements of the supreme leader about the rights of people. He has also said that the Guardian Council is also the right of people, and through these words has hit those who want to misuse this term in the mouth.”

He continued, “This Council does not listen to anybody and follows the law in accepting or rejecting election candidates.” These remarks are in contrast to what president Hassan Rouhani had earlier said about the role of the Guardian Council which he confined to mere “recommendation” and not actual vetting. And again without naming Rouhani, Janati further said, “Unfortunately some are taking positions against the Revolutionary Guards and the Basij in their remarks, which is contrary to those of the supreme leader. We are witnessing that some officials and personalities inside the country are trying to present America as the source of solution to the problems of the country.”

Elsewhere in his remarks Janati said, “The Guardian Council will not allow a group of people who do not have heartfelt beliefs in the regime, the constitution, the Imam’s line (a reference to Khomeini’s views), and the veleyat fagih to get into the Majlis and take up important decision-making posts in the country.”

On August 19, president Rouhani had publicly said that the Guardian Council was a supervisory body that should only recommend and not implement elections, which were reserved for the government. “The GC is a pair of eyes which cannot take action but must remain a supervisor,” he had said. These remarks of course resulted in responses from various officials and even ayatollah Khamenei on August 9th supported the view of the GC and said, “The Guardian Council are the eyes of the regime in elections. This is also true everywhere else in the world, although perhaps with a different name. Look out and see whether candidates are qualified or not. You must confirm that they are for them to run. If someone is not qualified, you reject him and stop him. This is their (GC’s) right, their legal right. Some erroneously talk of the right of people; the vote of the GC is the right of people.”

The Iranian Majlis (parliament) has been in the hands of the conservatives since 2004 and now with a more pragmatic president who is sympathetic to reforms, there is much talk that the whole political atmosphere in the country has changed and will bring in more moderate and reformist minded representatives to the Majlis in the February 2016 parliamentary elections. The Revolutionary Guards are among the hardline groups that have indicated concern that a change could take place in the Majlis because of the elections. The other concern hardliners and conservatives have had in Iran has been over the nuclear talks and a relaxation of tensions with the West. This is because they feel that with the lifting of the sanctions and an improvement in the economic conditions of the country, Rouhani and his team and views will be more popular in the February Majlis elections.

Officials inside parliament and those appointed by ayatollah Khamenei have openly spoken of their concerns about a change in the next Majlis with more moderate and reformist representatives taking over the assembly.

For example, ayatollah Khamenei’s representative in the IRGC Revolutionary Guard Force recently said, “Much efforts are made to change the revolutionary Majlis to a different one, which would in fact threaten the ideals of ayatollah Khomeini and the supreme leader, and even the needs of the regime. So the Guardian Council must perform its duties and announce candidates who are revolutionary so people can vote for them, thus implementing the ideal demands of the leader.”

The other important election, also in February is for the 86 seats of the Assembly of Experts on Leadership, a state body that oversees the work of the supreme leader and constitutionally is entrusted with the task of selecting a new leader. Because of ayatollah Khamenei’s age, and possible illness, the next Assembly may be called in to announce a successor to Khamenei, should he pass away. Conservatives fear that a change in the general public mood, more sympathetic towards Rouhani and his vision of Iran, may also make it difficult to keep the hardliners inside this body through the February elections. Candidates to the Assembly too are vetted by the Guardian Council, which is why so much emphasis is paid to the strict selection of “revolutionary” figures as candidates to both bodies. 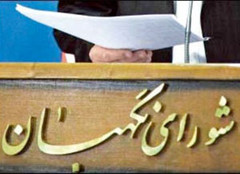