Iran’s ministry of intelligence announced the arrest of 40 members of “terrorist groups” in the provinces of Khuzestan, Sistan va Baluchistan, Tehran, Golestan and Mazandaran, and has said “Pressure caused by Russia’s military operations in Syria” has resulted in greater efforts by Iran’s “enemies” to challenge the security of Iran.

Speaking at a press conference on Tuesday, minister of intelligence Mahmoud Alavi said that more than 10 people had been arrested in the provinces of Golestan, Mazandaran, Tehran and Sistan va Baluchistan while more than another 20 individuals had been arrested in towns in western Iran. About the 20 individuals, Alavi said they “had initiated actions regarding Syria and Iraq.” He also claimed that the detainees “were pursuing efforts to engage in terrorist acts in various provinces and had carjacked vehicles from individuals and then killed the passengers. All of them have been identified and arrested, and their plans have been squashed.”

When unidentified individuals on October 16th attacked a mourning ceremony in Safiabad in the town of Dezful (in the province of Khuzestan) killing two individuals and injuring another two, the minister of intelligence announced that the 14 perpetrators of the incident has been arrested in a short time and handed over to the judiciary.

Prior to that, General Hossein Ashtari, the top commander of Iran’s police force had also said that a number of individuals had been arrested in connection with the shootings in the memorial ceremony in Dezful. Alavi had predicted earlier that during the months of Moharram and Safar “mourning ceremonies” would be under threat from “terrorist groups” because it was unbearable for “international and regional enemies to see unmatched security in the Islamic republic.” He continued, “Since many years ago they have used all means, with support from terrorist groups, to challenge the security of the Islamic republic.”

Speaking during his weekly news conference last Tuesday Alavi also said, “The pressure from Russia’s military operations in Syria against the terrorists has resulted in greater efforts by terrorist and enemies of Iran to challenge this country’s security.”

With the launching of the civil war in Syria and Iraq, and greater unrest in Afghanistan, extremist groups in Middle Easter countries too have expanded their activities and in their offensive view Iran as a barrier to their push into Iraq and Afghanistan.

Among the provinces mentioned by the minister of intelligence where the recent arrests were made, Sistan va Baluchistan stands out as the provinces where tens of individuals are killed every year because of violent armed clashes along the border with Afghanistan and Pakistan. 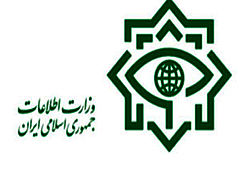