New Law Will Shut the Political Sphere of the Country

» Mohammad Kianooshrad Opposes the Changes to the New Parties Bill

Article 5 of Iran’s Parties Law provides that “Effective members of an annulled party who were effective members at the time of the annulment, and annulment was carried by a court order because it had committed a crime” shall be “deprived of creating a new party or joining one as a member for five years.” Commenting on this law which was passed as the country approaches the critical February Majlis election, former Majlis representative and a member of the Jebhe Mosharekat (Iran Participation Front, a pro-reform party that was banned by the government after the 2009 disputed elections) Mohammad Kianooshrad told RoozOnline that the law was a political act which if approved by the Guardian Council would result in the closure of the political atmosphere of the country.

In an earlier amendment of the Parties Law, no time limitation existed on banning former party members to join or create new parties. But the Guardians Council found fault with that and returned the bill for amendment. Then Majlis deputies added the 5 year restriction to the bill. Since the banning of the Participation Front, Kianooshrad has joined another newly formed party, the Hezbe Etehad Mellat Iran Islami party (National Unity Party of Islamic Iran) at its leadership level. The party has been formed by pro-reformist individuals. “It is completely clear that the spirit and framework of this law is to prevent some political activists from participating in civil activities. The (new) party is following its activities legally and through civil activism but this law prevents political activists from engagement through parties that have been formed in the new political atmosphere,” he told RoozOnline. “When law makers and then the judiciary ban a party in the absence of specific relevant laws regarding banning and dissolving, and then they pass legislation banning the members of these parties from forming new parties and from joining parties, it is clear that these are done to prevent political activists from the political sphere of the country and removing them from there,” he continued. “The reality regarding the banning of some political parties is that we have been witness that ban orders are issued without due process of law and the code of civil procedure, and even then court orders annulling a party are issued in absentia, with complete disregard for the law.”

Kianooshrad said he hoped that the Guardians Council would reject this bill. But if the bill is approved and becomes law, then it indicates the closing of the sphere for political activists. Pointing to the term “effective” in the law, he said this is a subjective term that can be interpreted differently.

He went further and said that this law will bite those who had passed it as well. “The Majlis should have acted as a professional and expert entity and looked at the good of the public for the long term when passing this legislation. Passing a bad law can actually act against those very individuals who have passed it as under different circumstances it could be used against them. Unfortunately some law makers act on the basis of short-term political gains. It is completely clear to me that this (law) was done from a purely political perspective.”

He concluded by saying, “If we assume and accept that members of a banned political party are not allowed to create a new political party, the ban on their participation in a new party is an additional problem in the law.” 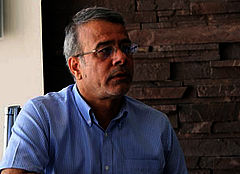